A top Roman Catholic Church Cardinal has told Italian newspaper La Stampa a conservative faction in the Vatican is in advanced stage to force Pope Francis to step down.

According to UK’s Daily Mail, the cardinal was quoted as saying: ‘The secret plan will be formulated on various axes and phases, but it will have one objective – to place the pontificate under such stress that Francis will have to resign.

Two weeks ago, Pope Francis revealed that he had already signed his resignation letter just in case bad health prevented him from executing his duties.

News of the alleged tension comes barely a week after Pope Emeritus Benedict XVI, was laid to rest.

‘The opponents of Francis know that right now they are in a minority, that they will need time to both win a consensus and to weaken [him].’

The cardinal added that the campaign would hinge upon ‘the progressive weakening of the Holy Father as well as his doctrinal choices, which will create a great deal of discontent which can be used against him.’

Formerly known as Cardinal Bergoglio, Pope Francis became pontiff in 2013 after the resignation of the arch-conservative Benedict.

The reports come on the heels of news that Pope Emeritus Benedict XVI’s former secretary is set to release a memoir that reportedly casts Pope Francis in unfavorable light.

Cardinal Georg Gänswein, who spent 19 years as personal secretary to Pope Benedict and has been nicknamed ‘the George Clooney of the Holy See’ because of his good looks, is a key figure in the faction against Francis.

Now that his main job tending to Benedict has come to an end following his death, questions have been raised about what Francis will do with Gänswein following this week’s publication of his tell-all book, ‘Nothing But the Truth: My Life Beside Pope Benedict XVI.’

Some Vatican watchers see the book as the first salvo in a new era of anti-Francis attacks from the conservative right, for whom Benedict remained a nostalgic point of reference in retirement. Benedict’s death, and Gänswein’s postmortem revelations, have removed the façade of a happy cohabitation of two popes.

In the text, Gänswein reveals previously unknown details of some of the biggest hiccups and bad blood that accrued during the last 10 years in which Benedict lived as a retired pope following his 2013 decision to retire, the first pope in six centuries to do so.

In one of the most explosive sections, Gänswein says he was ‘shocked and speechless’ when Francis essentially fired him from his day job as the head of the papal household in 2020 after a scandal over a book Benedict co-authored. Francis told Gänswein to stop coming to the office and to dedicate himself to caring for Benedict, essentially ending his job as the ‘bridge’ between the pontificates.

Printing previously secret letters between the two popes and relaying private conversations with both, Gänswein revealed that Francis even refused entreaties from Benedict to take him back on. Embittered, Gänswein described Francis as insincere, illogical and sarcastic in deciding his fate, and said Benedict even made fun of Francis when told of the decision.

‘It seems as if Pope Francis doesn’t trust me anymore and is making you my chaperone,’ Gänswein quoted Benedict as saying. 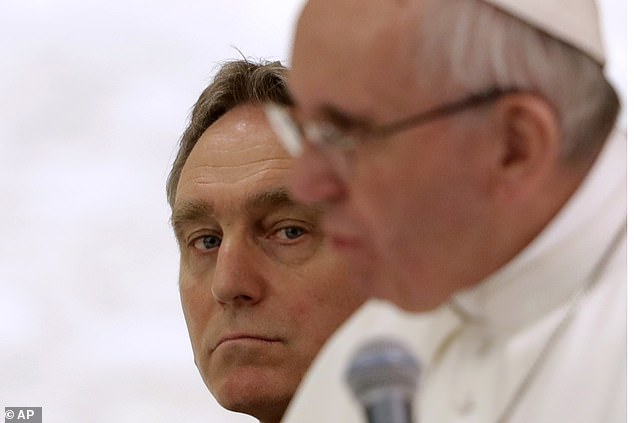 Cardinal Georg Gänswein, who spent 19 years as personal secretary to Pope Benedict, and has been nicknamed ‘the George Clooney of the Holy See’ because of his good looks, is a key figure in the faction against Francis. Pictured: Gänswein and Pope Francis at the Vatican, February 4, 2017 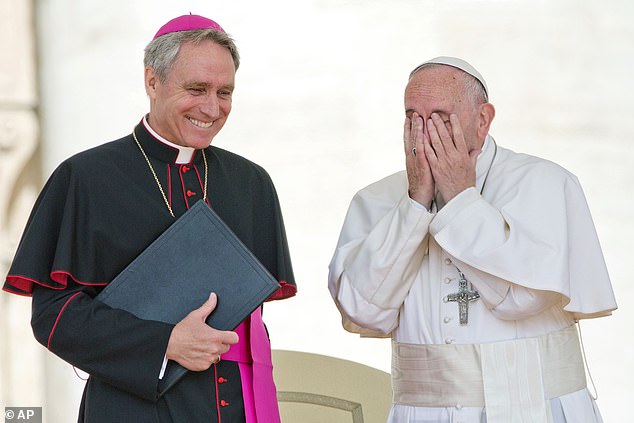 Gänswein has released an extraordinary memoir in which he casts Francis in a deeply unfavorable light. Pictured: Pope Francis with Archbishop Georg Gaenswein  in St. Peter’s Square at the Vatican, May 25, 2016

Gänswein also wrote of his dismay that, years earlier, Francis had refused him the right to live in the palace apartment occupied by his predecessor. After a longer-than-usual refurbishment, Francis gave the flat instead to the Vatican foreign minister, forcing Gänswe into continue living in the monastery that Benedict called home.

Cardinal Gänswein also spoke to German press and blasted the pope’s decision to limit the traditional Latin Mass, saying it had ‘broken the heart’ of his predecessor.

In his autobiography, Gänswein also recalled how he was unable to reach ‘a climate of trust’ with pope Francis and was ‘shocked and speechless’ when he lost his position in the papal household in 2020.

Other members of the traditionalist movement include cardinals Raymond Burke, an American, and Gerhard Ludwig Müller, who was a close ally of Benedict XVI.

As many as 100,000 mourners gathered in St Peter’s Square for the late pope’s funeral on January 4, with a host of royalty in attendance including King Philippe of Belgium and dowager Queen Sofia of Spain.

Francis, who arrived on a wheelchair and stood with the aid of a stick, did not mention Benedict by name in his homily until the final line. Referring to Jesus as the ‘bridegroom’ of the church, he said: ‘Benedict, faithful friend of the bridegroom, may your joy be complete as you hear his voice, now and forever.’

Eloah Ministries has revealed that cancellation of the Travis Greene concerts slated for Tuesday and Wednesday happened due "logistical challenges."…

Archbishop Nkoyoyo mentored me in ministry, Kaziimba says at memorial

The Archbishop of the Church of Uganda, Stephen Mugalu Kaziimba has praised the works of Livingstone Mpalanyi Nkoyoyo saying he…